The Western Clarion (Vancouver, 1903-25) was first published on 7 May 1903 by the Western Socialist Publishing Co., Ltd., managed by R. Parameter Pettipiece, and edited by George Dales. It had strong organizational backing: it was endorsed by the Socialist Party of British Columbia, the Socialist Party of Manitoba, the American Labor Union, which was affiliated with the United Brotherhood of Railway Employees, the Western Federation of Miners, the Fishermen’s Union of British Columbia, the Nanaimo Miners’ Union, Vancouver Trades and Labor Council, and Cumberland Miners’ Union. Initially, it was four pages, sold for one cent per issue, and was tri-weekly, published every Tuesday, Thursday, and Saturday morning, although the price, format, and publication frequency would change over the years. It was a mixed-format periodical incorporating a variety of literary forms. It is perhaps most notable as the organ of the Socialist Party of Canada, and as such as a radical voice among more moderate labour papers.

The history of The Western Clarion begins earlier than 1903. Citizen and Country, a new “Journal of Social, Moral and Economic Reform,” started on 15 March 1898 and was edited by George Wrigley in Toronto. Local authorities initially suppressed it, but Wrigley persisted and it later became the official organ of the Canadian Socialist League and gained the backing of the Toronto Trades and Labor Council. Wrigley, however, subsequently moved Citizen and Country to the west coast, where the labour movement and socialism in particular were developing more quickly. The publisher of the Ferguson (later Lardeau) Eagle, R. Parameter Pettipiece, moved to Vancouver and bought a share in Citizen and Country, which was renamed the Canadian Socialist and on 5 July 1902 replaced the Eagle as the official organ of the Socialist Party of Canada. In contrast to the more prominent trade unionist movement in eastern Canada, and in part following on the more radical Marxist socialism that developed among the miners on Vancouver Island, Pettipiece quickly changed the name to the Western Socialist, and in 1903 it merged with the Nanaimo Clarion, becoming The Western Clarion, which ran until 1925 (including brief periods as The Red Flag and The Indicator).

The banner of an early issue of the Clarion (12 May 1903) sets out the aims of the paper in few words: “Wage-Slavery Abolition” and “Collective Ownership.” The means, too, are described, first with respect to capitalism: “Capitalism is the scaffold from which has been built the economic structure of present-day society. The trust is the topmost stone: the worst is done. Take down the scaffold peacefully if you may, but take it down”; and second with respect to democracy: “Strike a Sledge-Hammer Blow at the Ballot-Box and a Tack-Hammer Will More Than Suffice on the Railway, Mine and Workshop.” The banner also notes a guaranteed circulation of 18,000 per week. No doubt this figure was important as regards the solicitation of advertising, which occupies about one-third of the four pages, but it also suggests high readership, early on at least. Although serving smaller communities throughout mainland BC and Vancouver Island, Vancouver itself, despite tenfold population growth since 1890, still counted only about 100,000 residents. Assuming that the circulation figure is correct, the radical content of the early Clarion clearly appealed to a significant portion of the population, especially as the number of people that read (or heard) the printed news was likely much higher than circulation. Regardless, it seems fair to surmise that people were interested in articles such as “A Definition of Socialism,” “Uprising in the Kootenays,” “Conditions at Extension Mines,” “Sympathetic Strikes,” and “The Earth for the People” (12 May 1903). The point is worth noting given that the Clarion, unlike earlier labour papers such as The Trades Journal (Spring Hill, 1880-91) and The Labor Advocate (Toronto, 1890-91), was reluctant to publish popular fiction. There are no sensation novels in the early Clarion, not even any poems.

By 1905, the Clarion was published every Saturday morning and sold for a subscription price of one dollar per year, although it remained at four pages in length. The banner message was simplified to: “Published in the Interests of the Working Class Alone.” This might seem an effective approach to increase readership, perhaps also sidestepping the reform v. revolution debate that separated moderates and radicals, or “legitimate trade unionist and revolutionary socialist” (Report 65), as the distinction was described in the Report of the Royal Commission on Industrial Disputes in the Province of British Columbia (1904). Martin Robin writes, “The Party newspaper, the Western Clarion, comprised a curious mixture of theoretical exposition and rampant vituperation” (96). This is true, although blunt, and by no means the whole story. An extract from Marx’s Capital, “The Buying and Selling of Labor Power,” on 20 May 1905 is an early example of the sort of literature that came to dominate the Clarion, which remained very much an organ of the Socialist Party of Canada, including in the same issue (as in every issue) a statement of the platform of the Party, and an application for membership, as well as notes from past meetings and notices for future meetings.

The “rampant vituperation” came mostly in the editorials, some of which do justice to the legacy of Phillips Thompson and The Labor Advocate. But there were also many articles about strikes and unions, that is, incremental rather than revolutionary reform. The key is the revolutionary frame that sets both the bankruptcy of capitalism and the fight for new conditions in a socialist view. Given the gravity and tone of the paper it is perhaps not surprising to find that “lighter” literature was incorporated to some degree at least. For example, in the following issue “In Lighter Vein: Humor, Wit and Satire from Paint, Scissors and Brush” (27 May 1905) sits alongside the platform of the Socialist Party of Canada and precedes another instalment of Marx’s Capital. This, too, may be “curious,” but it was likely welcome to many readers.

With respect to early and contemporary labour papers such The Ontario Workman (Toronto, 1872-75) and Cotton’s Weekly (Cowansville, Que., 1908-14), which were far more moderate, the Clarion’s emphasis on revolutionary or Marxist socialism stands out. Although carrying on Thompson’s earlier call for socialism in The Labor Advocate, and in some ways from the more moderate Citizen and Country, the Clarion takes a much harder line, arguing repeatedly and bluntly that wage slaves must self-educate, unite, and take control of the means of production. Unlike in The Labor Advocate, there was little or no room in the Clarion for alterative points of view or the allowance for incremental change. Articles frequently distinguished between the science of socialism (as consistent with human evolution) and popular variations of reform politics such as Christian and utopian socialism, Fabianism, liberalism, and even left wing Communism. The Clarion further differentiated itself by repeatedly addressing capital, competition, individualism, wage labour, and surplus value as part of a larger call for the working class to take control of economic power. Although the practices of members of the Socialist Party of Canada and the message of the Clarion were often not the same, the divide between reformist and revolutionary approaches to social progress in the Clarion was clear: there was no such thing as a moderate socialist.

The clear stance of the Clarion allowed it to stake out a position among other labour papers of the period, and with respect to the mainstream press. However, it also created dissension amongst members, some of which were open to reforms that needed to be addressed in the present. The role of women in Canadian society, and the case of suffrage in particular, seems the most obvious example. The hard economic line of the Clarion made it impossible to take a practical or ethical approach to such a fundamentally important issue, leaving competitors such as Cotton’s Weekly to appeal to many Canadian readers who would not wait for socialism to emancipate over half the population.

The Socialist Party of Canada favoured neither political compromise nor violent opposition, instead relying on the production of a knowledgeable electorate, which meant that the focus of their efforts was on the education of workers with access to the ballot. This emphasis on education dominates the pages of the Clarion from beginning to end despite variations in format and content. This included descriptions of key economic concepts, extracts from the writings of Marx and Engels, summaries or explanations of key Marxist topics, extracts from authors such as Oscar Wilde and Friedrich Nietzsche, and regular advertisements for socialist literature available in Canada and America.

Adherence to core values and the management of distinction with respect to both profit-seeking newspapers and the more moderate labour press may have seemed equally necessary, but enough people still had to want to read the paper, and preferably, buy it. The use of popular literature, including verse and prose, was common to earlier labour papers, and often wide-ranging in form, content, and emphasis, but the Clarion was largely hamstrung by adherence to the party line. The inclusion of Jack London’s novel The Iron Heel (1908) from 21 June 1913 to 1 August 1914 seems the most notable inclusion of what might be termed popular literature, although this example also illustrates the dominance of political values over the selection process. Poetry and short stories, like pamphlets and leaflets, were largely of the party propaganda sort. Although used only intermittently throughout the life of the Clarion, the inclusion of front-page cartoons is of interest. They seem a striking addition to an otherwise text-heavy paper clearly wary of anything that would diminish the reputation of the Clarion as a “serious” paper. 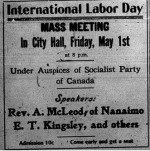 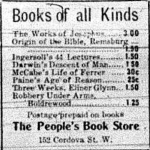 Unless otherwise noted, all materials are licensed under a Creative Commons Attribution-NonCommercial-ShareAlike 4.0 International License .